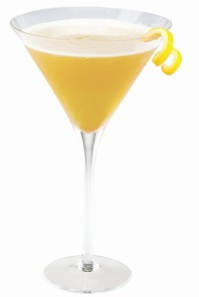 Shake and strain in to a Martini glass.

I love the name of this drink just as much as I enjoy the flavors.  It’s basically a Side Car with the addition of Rum, which is probably why I prefer this version.  It is a very easy-to-drink, balanced and tasty beverage.

I had assumed this drink was a pretty recent creation, but from what i’ve been able to find out it was actually invented by Harry MacElhone, bartender at Harry’s New York Bar in Paris, in the 1930’s.  There is some debate that it originated before this in 1920s London, but the name ‘Between the sheets’ appears first in the Paris bar, so this is the one i’m sticking with! If someone believes this to be incorrect, please get in touch because i’d be interested to hear other thoughts on the matter…this is one of the first drinks i’ve tried to research and not been able to find that much information on.

Anyway, this is certainly a strong (has 3 different liquors) but refreshing option for hot summer days. As the heat wave continues here in Los Angeles I will continue to order this until the Autumn arrives! 🙂

Today I found myself celebrating Bastille Day at Bagatelle in Hollywood.  Bastille Day is the name given in English-speaking countries to ‘French National Day’ which is celebrated on the 14th of July each year.

In France, it is formally called La Fête Nationale and commemorates the storming of Bastille Fortress-prison on 14 July 1789.  The act of storming Bastille was seen as the uprising of the modern nation during the French Revolution and has been celebrated every year in France on the Anniversary of the event, since 1790.

They had created quite a party at Bagatelle.  Girls were dancing on table tops, French flags where flying everywhere and champagne was flowing heavily!

Zach gets in to character!

Zach Patterson (Head barman) had made an interesting version of the French 75 for the party and used ‘Lavender honey’ instead of simple syrup, which added an interesting floral note to the drink.

Both recipes (Zachs and the original above) are very similar in taste.  They’re both refreshing, bubbly, sweet and slightly citric drinks. Great options for Summer and a nice alternative to plain champagne for celebrations.

If you feel like getting in on some French action yourself this evening, have a go making the above recipe at home or head in to Bar Chloe in Santa Monica where they’ll be making them all night (for those who know to ask!)

Cocktails to cure your ‘Oscars fever!’

As you probably know it is award season here in Los Angeles, so I thought what better way to celebrate the 84th Academy Awards this Sunday 26th February 2012 than learning about a couple of ‘Hollywood Classics’ (Cocktails that is).

In the 1930s when the likes of Ginger Rogers and Clark Gable walked the red carpet, there were a couple of drinks created here in this starry eyed city that deserve a mention.

Shake in ice and strain in to a chilled cocktail glass.

This cocktail from the 1930’s was featured at the late ‘Embassy Club’ in Hollywood.  Adolph “Eddie” Brandstatter owned a number of Hollywood hotspots in this era, including the Café Montmartre which was hugely popular with the movie stars of the day.  When the stars complained about the hoards of fans bothering them (people would swarm around the entrance and stare at the patrons eating!) Eddie had the idea to knock a passageway from his place in to a newly constructed building next door and this new space became the exclusive Embassy Club.

It was a speakeasy styled private venue that ‘Old Hollywood’ movie stars could go to escape from the crowds.  Membership was restricted to Brandstatter’s closest friends which included many stars of the time including Charlie Chaplin, Gloria Swanson, Jean Harlow and Howard Hughes.

Sadly, the move turned out to be a disaster for Brandstatter because the Café Montmartre lost it’s appeal. The public didn’t want to go there if they couldn’t see Hollywoods royalty.  In order to try and save his businesses he opened Embassy Club to the public but this in turn meant the movie stars stopped going and Brandstatter ended up losing both businesses and filing for bankruptcy. While it was around it is said to have been a beautiful location with a rooftop promenade and glass enclosed lounge with views of the Hollywood hills.

This drink has a great balance of sweet, sour and bitter.  I tried it for the first time this week-end and found it to be really quite delicious.  The Embassy Cocktail is currently a special on the board at Sadie, in Hollywood and will be available to order throughout this award season.

Garnish: Olive or a lemon twist

Stir in ice and serve in a chilled cocktail glass

When I think of “Old Hollywood”, one of the actors that springs to mind is Cary Grant.  It is said that Cary Grant’s favorite cocktail was the Classic Martini (made with Gin of course). Author Ian Fleming always said he based his most famous character James Bond on Cary Grant.  James Bond had a reputation for living dangerously and making the wrong seem right, he also had to be different from the average Joe, so Fleming had his character always order this classic incorrectly…”Vodka Martini, shaken not stirred”.

A so-called ‘Classic Martini’ is actually really complicated so I won’t go in to it all now,  however the original recipe does call for Gin, which is a much better option than vodka in my opinion. Many cocktail connoisseurs also believe that shaking gin is bad because the shaking action “bruises” the gin (a bitter taste can sometimes occur). In Fleming’s novel Casino Royale, it says  “Bond watched as the deep glass became frosted with the pale golden drink, slightly aerated by the bruising of the shaker,” I advise you to order yours stirred, not shaken and always with Gin, not Vodka. Sorry James!

Garnish: Lemon peel twist
Shake in ice and strain in to a chilled cocktail glass.
.
The Hi Ho Cocktail was created in Hollywood, California in the 1930’s and named after the cross streets where the Academy awards are held each year- Highland and Hollywood (Hi Ho).   First published in ‘World Drinks and How to Mix Them’ by William Boothby in 1934. I prefer this to a classic martini because I am not a huge fan of vermouth.  While red port is much more common these days, white port is still readily available so make sure you use it for this drink. A dry white port and a London Dry Gin are suggested.

This is a non-alcoholic cocktail named after one of the biggest child stars in history.  I felt the need to put this one on the list (despite its lack of liquor) for two reasons.

Firstly, Shirley Temple was definitely part of the old Hollywood scene.  She was actually awarded a miniature Oscar for charming America with her singing and dancing in the midst of the Great Depression. She was given the award when she was just 6 years old “in grateful recognition of her outstanding contribution to screen entertainment during the year 1934.”and this ‘mocktail’ is said to have been created so that she would have something to drink when out with the adult Hollywood stars.

Secondly, many places today make this drink incorrectly using ‘Sprite’ instead of the original recipe that calls for Ginger Ale,  be sure to ask for the latter when ordering, you won’t be disappointed.

My research for this piece comes from many sources, but in particular I want to mention three great books I referenced;

1. ‘The Story of Hollywood’ by Gregory Paul Williams

and a fun read novelty book;

3. ‘Hollywood’s Favorite Cocktail Book – including the favorite cocktail served at each of the smartest stars’ rendezvous. Food and Wine Combinations.’ by Buzza-Cardozo published 1928.

.
I hope you try and enjoy some of these drinks this award season, I have to admit I am not a big Martini drinker myself because in all honesty I find them too strong! I mean, they are for the most part almost straight liquor. I have not yet tried all of the drinks on this list, but am suggesting mainly for their Hollywood history.
.
I don’t live too far from Hollywood Blvd but as a picky drinker I have decided it is my duty to force myself and my boyfriend to test these classics whilst watching the Hollywood excitement unfold on TV today. I suggest you do the same! 🙂 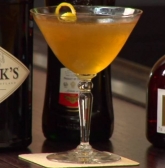 Add Ice, Shake and Strain in to a cocktail glass

Next Wednesday is the 29th February…and what does that mean?…You guessed it, it’s a Leap Year!!! I thought you all might want something fun and different to order/try over the week-end with this upcoming theme in mind.

This classic drink was created by Harry Craddock for the Leap Year celebrations at The Savoy Hotel, London on 29th February 1928. If you’re a Gin drinker you’re bound to enjoy it. I personally like it with Hendricks Gin (as Hess suggests in the video clip below) but a London dry Gin will also work, and is slightly more appropriate considering the drink itself originated in London.

You can order this classic at Bar Chloe in Santa Monica starting today (Friday 24th)  I urge you to head down there and get the Leap Year festivites rolling early!

You can watch this drink being made by Robert Hess below;