Today is officially my 1 year BLOGGERVERSARY!!! WOO HOO!!!! I have been posting for one whole year as of this moment. 🙂 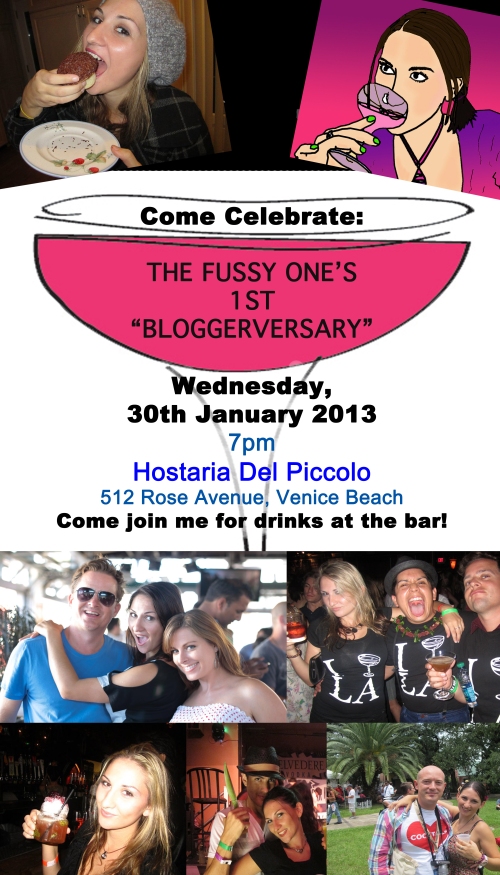 Ironically, this post is not about me so much as it is about my darling partner Greg Bryson. I wanted to write a little post for him because I am very proud of his achievements this past year also. He has successfully begun running two bar programs (one in Santa Monica and the newest in Venice Beach, California), created a huge selection of new drinks for his cocktail menus and a few weeks ago his St-Germain cocktail recipe was selected as a runner up for the 5th annual Can Can Classic cocktail competition out of 13,000 applicants.He created a delicious drink recipe called ‘Oaxcan in Paris’ (recipe to come soon) 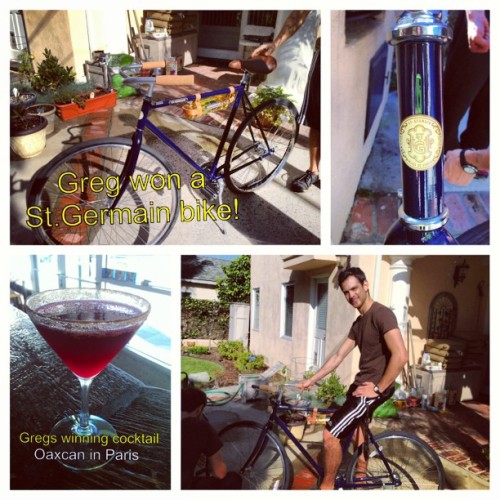 This morning he received a custom St-Germain roadster bicycle and an accompanying bottle of St-Germain. I am told the bike was featured prominently in the Wall Street Journal, Cool Hunting, WWD, and a score of other publications and is a great looking piece of equipment that i’m super jealous is his! I love St-Germain as a product, it reminds me of Summer in England when I used to drink Elderflower cordial. For those who don’t know, St-Germain is a sweet liqueur crafted in the artisanal French style from elderberry flowers, it is currently made in Paris. 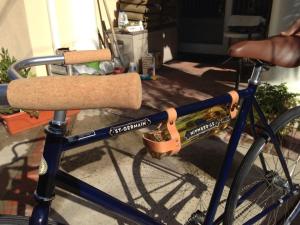 Loving Greg’s bike which has cork handle bars, leather straps to hold a bottle of St.Germain on a road trip and an old fashioned European feel to it.  Anyway, here’s me showing off my boyfriend! LOL

Don’t forget to join me for drinks at Hostaria Del Piccolo in Venice tonight to celebrate a day of alcohol related achievements. Hooray!

Next week sees some big achievements for me. On Monday 28th January I will have been living in the States for 5 years…then on 30th January I will be celebrating my 1st ‘Bloggerversary’.  Yep, this little blog will be one year old on Wednesday!

The above drink recipe was created lovingly by my Beverage consultant boyfriend Greg Bryson, as a nod to me…and my fussiness! This drink is nothing short of delicious, and perfectly fits my personality.  The use of beet juice gives it an almost healthy taste and vegetive flavors, for some reason the beet reminds me of carrots at times too.  When Greg first met me (read about me) I would never have eaten a vegetable by choice, so incorporating it in a drink with my namesake is pretty smart and somewhat amusing.

This drink has everything I love combined. It has Rum as the base (my favorite), it’s Sweet, Strong, Pink, Fruity and Girly. (Add a dash of crazy and it would be describing my personality!)

In essence this drink could be described as a Vanilla Beet Daiquiri, but I prefer to call it by it’s new name… “The Fussy One” 🙂

Head on down to Greg’s new Venice location of Hostaria Del Piccolo on Wednesday for a drink to celebrate. Greg will be making this recipe as well as loads of his other creations, it’s going to be a fun night.

A big thanks to all my readers, keep following and commenting. I love your suggestions and feedback!

Here’s to many more years of eating, drinking and blogging… 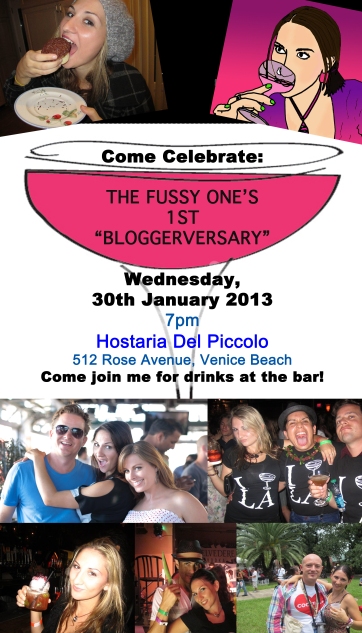 Filed under Drink of the Week, Events, Fussy News

Muddle cucumber, shake and double strain all ingredients in to a coupe glass.

OOOOOH I love cucumber! It’s so refreshing, crunchy and light in flavor. I have also discovered that I love it in my cocktails, as I have had a few cucumber style martinis recently that I really like.

The above recipe was my drink of choice last week for my birthday celebrations. It was created by Brandon Ristaino for the ‘Mixology Bar’ in The Penthouse at Mastros.  For those who don’t know, The Penthouse is the fabulous new third floor addition to the already successful Mastros restaurant in Beverly Hills.

This drink is very tasty and probably my favorite on their menu right now. It is subtly citric with refreshing cucumber notes. The gin used is Plymouth which is very light in juniper flavors so is a great option for someone who tends to lean towards vodka as a base but wants to start trying Gin. This drink definitely does have a sweetness to it that I always love, but it is nicely balanced with the sour elements too.

Definitely worth a trip to The Penthouse for this one, or if you’re not in the area try making it at home.  Will be great when the summer months roll around, just so nice and refreshing.

The WordPress team (the platform I use to prepare my blog each week) have prepared me a really cool 2012 annual report on my blog! If you’re interested to see how I did last year (stats, countries that viewed me etc) then Click here to see the complete report.

I am so very pleased with all the achievements I made in 2012. On January 30th TheFussyOne will be 1 year old and bigger than I ever imagined.  I never thought I would get so many opportunities (like Tasting Panel Magazine) purely because of my love of writing and going out to try new places with my boyfriend!

Thank you so much to all my readers for your support, kind letters and overall interest in my little space! I look forward to what 2013 will bring and hope you continue to follow. 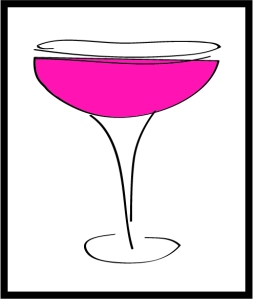 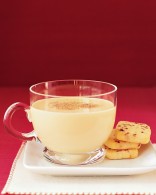 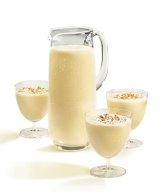