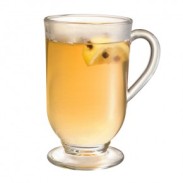 You must put in the spirits before the hot water, then stir with a spoon. Use a Toddy glass if you have one.

It is officially flu season, and sadly today I am writing this post from the comfort of my bed with a horrible sore throat and a stuffy nose! HOWEVER a silver lining can be found in the above drink which is great when you’re feeling a little under the weather.

Honey and lemon are very soothing for a sore throat, and the alcohol will kill some of those germs…even if I just made all that up, the drink tastes great and you will at least feel better from drinking it!

The original recipe of a toddy calls for Brandy as the base, however Bourbon has become a popular alternative and American standard for the recipe. It is a really old drink so the origins are complicated and a little unclear, however Jerry Thomas writes about the Brandy Toddy and Whiskey Toddy in his book “How to mix drinks or the Bon-Vivant’s companion”  1862.

The Brandy Toddy being the one described with hot water, the Whiskey toddy says to use ice. I personally like using Whiskey in a hot toddy, although it is unclear why Jerry Thomas favored Brandy as the base for the hot version.  A Whiskey toddy is mentioned in Charles Dickens first book ‘The pickwick papers” which was written in 1867, so we know the late 1800s saw it as a fairly popular drink for cold nights.

Just so you know, a Toddy glass is a heat resistant glass mug that is perfect for Irish coffees as well as Toddy’s.  It is always a good idea to warm the glass before pouring in the boiling liquid, to prevent any risk of cracking.   If you don’t have a toddy mug in your collection, I recommend getting one because they are always useful to have around for hot drinks.