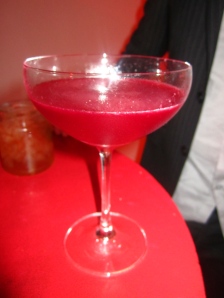 This drink popped to mind this morning after I was thinking of Beets in a salad and I remembered the wonderful Beet drink that Brand Ambassador for Havana Club, Meimi Sanchez had created.  We had the pleasure (my boyfriend and I) of having an in depth talk with Meimi at London Cocktail Week last year about Havana Club and it’s history.  Part of the talk included tasting a number of cocktails, and the recipe above was the one that stood out for me in particular.  In true Fussy One style, I admit I had never actually tasted a beet until I had this drink, it was so delicious that I have continued to enjoy the deep red-purple Vegetable ever since.

The beauty of this drink is in the vibrant appearance from the natural colors in the Beet juice, the drink itself has an almost ‘healthy’ taste (if that makes sense) and you can taste the vegetable flavors.  I felt like I was cleansing my system even though I was drinking alcohol, hard to describe but it just tastes good for you!

The version we had in London (Uk recipe is above) was created using Havana Club Rum (I adore!).  Obviously most people in the US cannot get their hands on Cuban rum due to the Embargo, so Metusalum Rum is a good alternative.  The overall drink is sweet, refreshing and stunning in appearance, it’s a daiquiri at heart so great for summer.

Anyway, give it a go and let me know what you think!