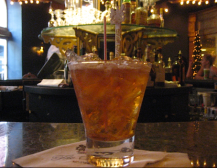 Garnish: Lemon Twist (although I prefer a cherry!)

Stir ingredients in ice for 2 minutes, then strain in to an ice filled Old Fashioned glass.

As the majority of the Worlds’ cocktail community prepares to head to the sticky humidity of Louisiana next week, I thought I should put up a good old New Orleans classic.  I like this drink because it’s very strong and aromatic but still really smooth when made properly.

New Orleans was founded in 1718 by Jean-Baptiste Le Moyne de Bienville, and the city itself was originally centered around the French Quarter, or the Vieux Carré (which means “Old Square” in French).  The drink is named after this famous region, which is a hot spot for tourists and the location of almost all the action at TOTC-Tales of the Cocktail.

The drink was invented in the early 1930’s by Walter Bergeron, although it wasn’t seen in writing until the book ‘Famous New Orleans Drinks and How to Mix ‘Em’ was printed in 1937.  It is said to have been created at the famous Carousel Bar inside the Hotel Monteleone. 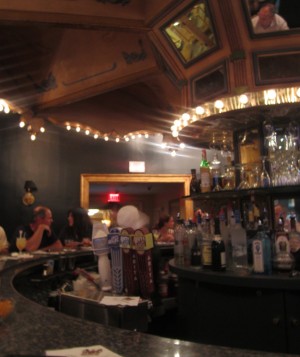 The Carousel Bar was one of my favorite bars in NOLA, because of its very unique ‘moving’ feature.  The bar seating is on an actual carousel that very slowly rotates around the central bar (one turn takes approx. 15mins), at first it’s a little strange to see the room spinning around you but to be honest it really just adds to the overall feeling of disorientation one usually feels on a trip to New Orleans!

If you enjoy a nice stiff drink I highly recommend giving this classic a try, and for those of you going to Tales of the Cocktail next week I suggest ordering a Vieux Carré at the bar where it was first created. Enjoy!

One response to “Drink of the Week”