Today I found myself celebrating Bastille Day at Bagatelle in Hollywood.  Bastille Day is the name given in English-speaking countries to ‘French National Day’ which is celebrated on the 14th of July each year.

In France, it is formally called La Fête Nationale and commemorates the storming of Bastille Fortress-prison on 14 July 1789.  The act of storming Bastille was seen as the uprising of the modern nation during the French Revolution and has been celebrated every year in France on the Anniversary of the event, since 1790.

They had created quite a party at Bagatelle.  Girls were dancing on table tops, French flags where flying everywhere and champagne was flowing heavily! 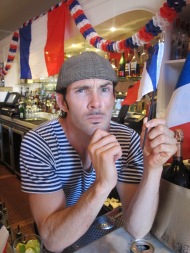 Zach gets in to character!

Zach Patterson (Head barman) had made an interesting version of the French 75 for the party and used ‘Lavender honey’ instead of simple syrup, which added an interesting floral note to the drink.

Both recipes (Zachs and the original above) are very similar in taste.  They’re both refreshing, bubbly, sweet and slightly citric drinks. Great options for Summer and a nice alternative to plain champagne for celebrations.

If you feel like getting in on some French action yourself this evening, have a go making the above recipe at home or head in to Bar Chloe in Santa Monica where they’ll be making them all night (for those who know to ask!)