This new place just opened in the last few weeks in the space where the infamous nightclub Les Deux used to be. It is no longer part of the club 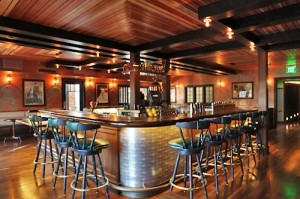 scene and the area seems to have been cleaned up drastically. The owners spent thousands of $$$ ripping out the court yard and remodeling the inside. The end result looks wonderful. I really appreciated the brass top square bar, which is so unique in this town that seems to open bars constantly with marble counter tops. The brushed orange/brown metal makes it feel more rustic and old. I am sure as the bar is continuously used and dirtied it will add even more character to it.  I am told their inspiration/concept was “Steam Punk, think ‘Jules Vern’. When looking around the room at the mix of metals, old saloon style attire on the bartenders and bizarre black and white (creepy) photos on the wall, in my opinion the place reminded me more like the movie ‘Cowboys & Aliens’!! The most attractive feature that stood out to me, besides the brass bar, was the gorgeous wood panelling on the ceiling. The ‘orange/brassy’ color palette of the place make for a warm and inviting bar and restaurant, there are black and white framed images on the walls that change as you walk past them…cute idea, but honestly just creeps me out! Big thumbs up for doing something different though!

The cocktail list was pretty impressive. All bespoke syrups and fresh ingredients. I will be doing a repeat review at a later date for the restaurant side of Sadie, I was there for the opening party and sampled drinks only on this visit.  The drinks I did try were fantastic. Giovanni Martinez was in charge of the drink program here (he did the drink programs for ‘Fig & Olive’, Hollywood and ‘Buffalo Club’ Santa Monica) with the help of his extremely talented bar staff, which include Greg Bryson, Head Barman at ‘Bar Chloe’, Daniel Parino from ‘Fathers Office’ and Jade Warner from ‘Next Door Lounge’.

I tried the ‘Kentucky Ninja’ first which I enjoyed so much I had it again before leaving, it was well balanced and an interesting mix of flavors. Bourbon was the base, which is certainly not my ‘go to’ liquor of choice but worked beautifully against the lavender-infused wild honey (which the bartenders infuse in house).

The next drink I sampled was a ‘La china’. My friend liked this, however it wasn’t my favorite. I really wanted to like it, even though, to be perfectly honest I don’t enjoy the flavor of Tequila. I liked the idea of it. Lychee black tea infused tequila blanco sounded wonderful, but when I tasted it the tequila over powered any attempt to taste the tea or lychee elements and therefore I didn’t like it too much. It was balanced and everyone else around me enjoyed it. If you like Tequila a lot, you are bound to enjoy it!

After these new drinks I decided on a classic Bramble. This has a summery and refreshing taste to me and Sadie’s version uses muddled 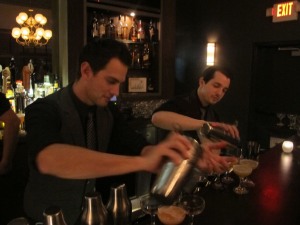 fresh blackberries as well as the blackberry liquor.  The bramble is essentially a short gin sour with crème de mûre, on top. It was not invented at Sadie of course, it was created in 1984 by Dick Bradsell, at ‘Fred’s Club’ in London’s SoHo — although it is remarkeably similar to Jerry Thomas’ Gin Fix from his 1862 cocktail guide. Method is the same, prepared over shaved ice and fruit of the season on top. The only real difference is the fact ‘Blackberrys’ aren’t specified and no Creme de Mure. Anyway, it is a refreshing drink nonetheless and was made well here.

I didn’t get to sample but was intrigued by the Gran Prix mix of gin and beer! I am not a huge beer drinker (even though i’m from the UK) and even less so of Pale Ales…far too hoppy for me. However, I would be interested to hear how this tasted if anyone tried it. Message me if you enjoyed it and what worked/didn’t work with it. Here is the drink profile for those interested…

All in all my experience at Sadie was excellent. The bar staff seemed extremely competent and every drink, by each individual bartender (I made a point of having drinks made by different people this night) came out balanced, beautifully presented and well made.

Service was fast and efficient, bartenders were knowledgable and new decor was interesting and attractive. It really is an excellent staff and bar program, and hats off to them for opening in the heart of “Head to toe Ed Hardy, Grey goose martini drinking ‘Les douche’ area”  They bring a clear level of sophistication to the area and hopefully will inspire that sort of client to try something new. I did and I loved it.  The half point missing from excellence was due to the odd music choice of the night, the tequila drink I didn’t care for  and the ‘les douche’ style people that attended that evenings event. I am almost certain the DJ and customers for opening night were not the usual, so this is likely to increase to a full 5 experience on second inspection. I will definitely be back.

One response to “Sadie (Bar Review)”